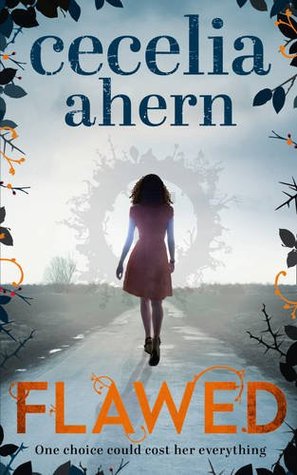 Plot: Celestine North lives a perfect life. She’s a model daughter and sister, she’s well-liked by her classmates and teachers, and she’s dating the impossibly charming Art Crevan. But then Celestine encounters a situation in which she makes an instinctive decision. She breaks a rule and now faces life-changing repercussions. She could be imprisoned. She could be branded. She could be found FLAWED.

I was excited to get my hands on a copy of this, mainly because I am still crying inside after Where Rainbows End. This book got very addictive. Sure, its got loud echoes from Hunger Games and its sisters. I didn’t really find it annoying- or maybe I just haven’t read that many dystopias. Overall it was very thrilling. I love reading about young characters re-discovering the world around them, standing up to injustices, and finding their own voice. Celestine was breezing through life until she saw something that wasn’t right. She spends the rest of the book sticking to her belief and trying to decide between right and wrong.

The Flawed world is less violent than HG- its motive is about keeping society pure from bad judgement and its consequence. This soon spirals out of control. Those at the perfect top are abusing their power, and people start fighting in the street about morals. A revolution is brewing. Celestine gets caught between clashing power-heads as they clamber to use her as a mascot. She also gets caught between two guys, affectionate boyfriend and hulking loner. This all sounds very unoriginal and repetitive, but I think the novel has a clear message (and you can never have too many love triangles).

Its not just about pent-up teen angst- its about how people ignore cruelty unless it directly involves them.

Celestine watches as her neighbor gets dragged away mercilessly, and her sister and boyfriend in turn do the same to her. Once you are flawed, you are branded for life. You have a curfew, a diet, your own section on the bus (sounds horribly familiar?), and people treat you as scum because they feel you deserve it. Of course nobody wants to help you, because they will face the same fate. This attitude applies to bullying, racism, sexism, poverty and other prejudices. Novels like this help you see the daily acts that inspire dystopias. The constant paranoia to be perfect and blend in resonates at any age, but particularly adolescents; which is why its good to be reminded that mistakes make you better.

This novel is fast-paced with heap of ugly and compassionate personalities which will get you reeling and welling up with emotion. Let’s hope it keeps up the action because I can’t wait for the sequel.

Many thanks to Harper Collins for my review copy xx

One thought on “Flawed by Cecelia Ahern”