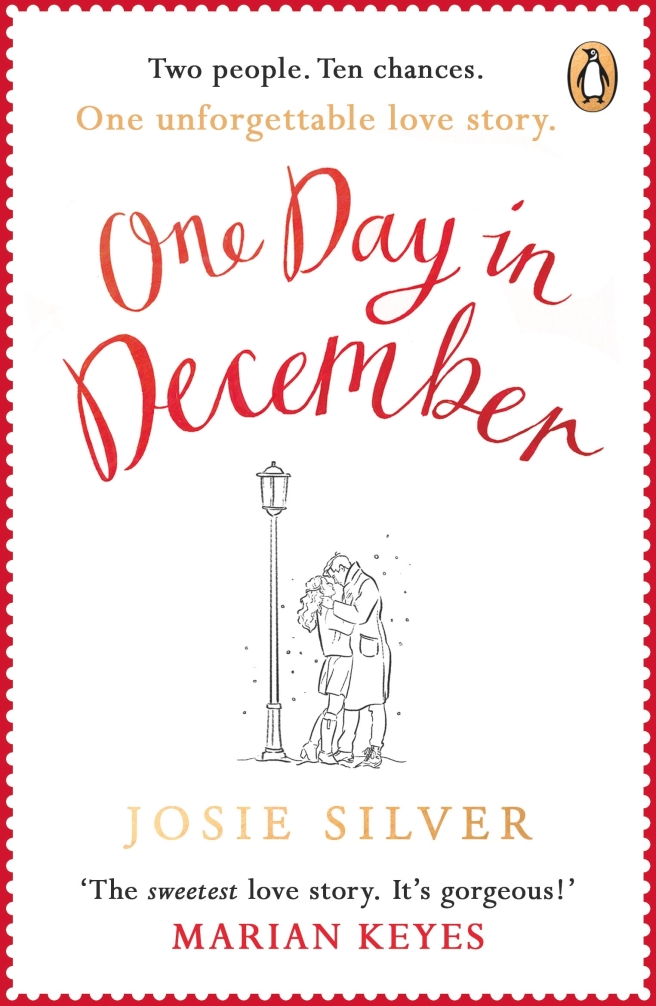 If you want to weep, laugh, melt and cry out in anguish during the chilly months, then One Day in December is your perfect fix, an ideal Christmas romance for fans of Richard Curtis tearjerkers. It not only deals with the sentimental and cosy parts that love-stories should tick off, but the infernal frustration and rage involved. This debut novel proves that fate can be both cruel and wondrous.

I do genuinely believe in love at first sight, or a certain connection that two people can have which is almost instant. You have to believe in this theory, even a tiny bit, to enjoy the story. Two strangers, Laurie and Jack, glance at each other through a misty bus window and experience just that. Everybody knows how buses can get during the winter;  jam-packed, foggy and cough-fumed. For Laurie, all of this evaporates for one second of life-altering, mysterious magic. Then it’s gone as her bus drives away. She spends a whole year searching for ‘bus-boy’ only to be introduced to him as her best-friend’s new boyfriend. She convinces herself the whole concept of Jack as her instant soul mate is insane and gets on with life. And life certainly barges through, another point this novel conveys successfully. Through new careers, holidays, illnesses and even marriage, time slips by ruthlessly. The only way to claim moments is to be fearless and take chances. Ten years can be filled with everything and nothing.

We have all been a Laurie; out of uni and trying to figure out how to be independent. She is sweet, passionate and realistic. I have just watched the Bridget Jones double dose of lunatic and heart-warming tumbles. The films came out when I was too young to understand all the jokes grown-up girls and mums were making around me. One Day… reads like a homage to the great Bridget. It has the same hilarious manic narration but navigates a style of its own. It does well in keeping a reader’s attention through the spirals of diverting events. The language was at times quite dated, perhaps a generation behind. Overall, it was a pleasure to have been part of Laurie’s and Jack’s beautiful journey, which truly left me in awe about life’s magic moments.

One thought on “Blog Tour: One Day in December by Josie Silver”