I’ve been doing some research on popular romance novels and The Sheik was one of the first, published in 1921. It was a fascinating read but I would only recommend it if you, like me, are curious about the bygone world.

Diane Mayo is a boyish young woman. She was raised by an uncle who never wanted to be saddled with a child. So she adopted ‘masculine’ traits: not emotional or lovey-dovey. She liked travelling and being independent. On one of her travels, she gets kidnapped by a powerful Sheik who intends to imprison her as his mistress. He’s also a handsome, mysterious, strong figure of the desert, who is prone to moody fits.

She protests at first (obvs because she gets raped multiple times) but then ends up falling in love with him. She learns things about his past and family. He’s actually half Spanish and had a European education before being adopted by a Sheik (so that apparently makes him ‘OK’). His father was a horrible English lord, so that’s why he hates English people and wants to kidnap them..

The novel is wrong and uncomfortable. It’s racist, sexist, misogynist, rapist- a lot of ists. But its not really graphic in terms of sexual or violent scenes. It was easy to read and thrilling at times. I could see why this was popular and started off the sub-genre of Sheik romances. It even inspired its own silent movie, which many consider it classic, but I thought was a bit naff and even creepier. 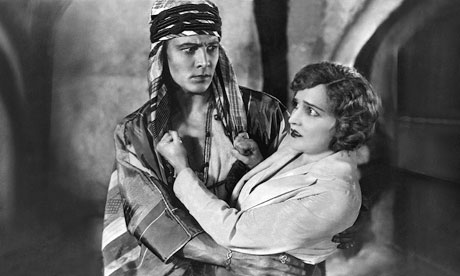