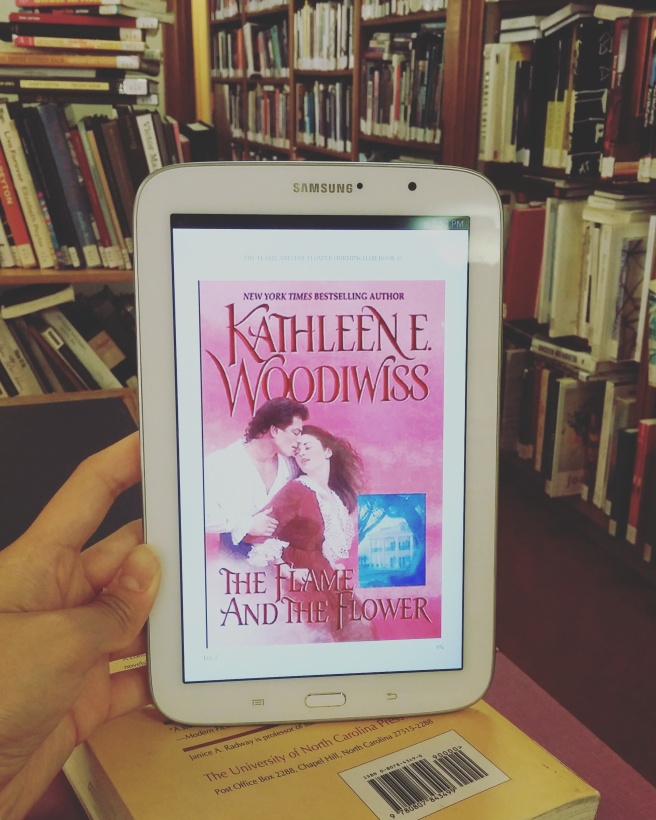 This was the first ever popular historical romance. It was an instant bestseller and completely changed the genre. It opened up the flood-gates to a whole new way of writing and publishing for women. Woodiwiss’s daring inclusion of explicit scenes rocked everybody’s boat, and the ripples are still in effect today. Like The Sheik, it was a fascinating read for this 21st century reader. But the book was truly awful.

Young, innocent and beautiful Heather, lives a Cinderella lifestyle with a cranky old aunt, who is irrationally jealous of her beauty. One day a dodgy uncle offers her a a chance to teach at a girl’s school and whisks her off to London. When they get there, its clear his intentions are far from paternal and he tries to rape her. She stabs him with a knife and runs off, only to fall into the clutches of a tall, dark handsome captain. He mistakes her for a prostitute and keeps her locked up in his cabin, whilst raping her.

At this point (which is only 30% through), I wondered if the story would get any better. There was just too much rape, weeping, and Captain Brandon’s eye-balls constantly glued to Heather’s body. But it didn’t really. Heather escapes (score..) and goes back to her aunt, only to find out that she is pregnant. Her aunt whisks her back to London to find the Captain so that he will marry her. An old friend of her late father, who is a judge and very kindly (where was he from the start of this misery tale?) helps. Heather and Brandon are married, but the latter’s not happy about it because he thinks she tricked him into it (I KNOW! God forbid he would think dragging women off the street and raping them is his own fault). So he takes her back to America where he’s from, whilst being mean to her throughout.

Thing is, he has unrealized love for her, so he’s not completely mean. The tender moments build up to a reconciliation at his estate, which is kind of swoony, but not enough to make-up for the rest of the book. The secret of her killing her uncle follows her to America, but she and Brandon manage to sort it out after some mysterious moments and fighting scenes.

So yes, I would only recommend this if you want a sociological insight into some 1970s erotica.

One thought on “The Flame and the Flower by Kathleen Woodiwiss”